French bulldogs are one of the most popular dog breeds in the world, and it's clear to see why. From its adorable stocky frame to its expressive eyes and wonderful temperament, there are endless reasons to love this family-oriented pet. Its bowlegged gait and bat ears are unmistakable and are just a couple of reasons why people adore French bulldogs so much. 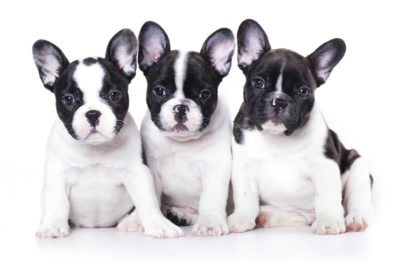 A typical French bulldog is around 12 inches tall, weighs up to 25 pounds and has a life expectancy of between 10 and 12 years. It has a cute wrinkly face and a top lip that hangs over the bottom lip, resulting in an irresistible pout you can see on most bulldogs. Its coat is soft, smooth and very easy to care for, so you don’t need to brush your French bulldog more than once a week. Colors include black and white, fawn and brindle and black, and these dogs are minimal to moderate shedders.

Believe it or not, French bulldogs are not from France! They originated in Nottingham, England, where they were companions and rat-catchers for laceworkers. Lacework dried up in England following the industrial revolution, so many laceworkers moved to France and took their loyal French bulldog pals with them.

By the early 20th century, the breed had become popular with bohemians in Paris, including artists, writers and musicians. French people prized the dogs for their plucky personality, tiny stature and oversized ears — which they’re now famous for around the world. The American Kennel Club officially recognized the French bulldog as a breed in 1898. As of 2020, it’s the AKC’s second-most popular dog breed in the United States.

Why Does Everyone Love French Bulldogs?

French bulldogs are smart, beautiful and full of personality. These are just a few reasons they’re popular. They’re loyal, adore children and tolerate familiar dogs well. This confident yet loving temperament is one of the main explanations for why they’re so beloved in the United States — but of course, their gorgeous appearance plays a role, too.

Frenchies are charming and have a keen sense of humor, so they make wonderful companions. In fact, it’s what they were bred for, so they tend to get very attached to family members and require lots of love and attention to thrive. 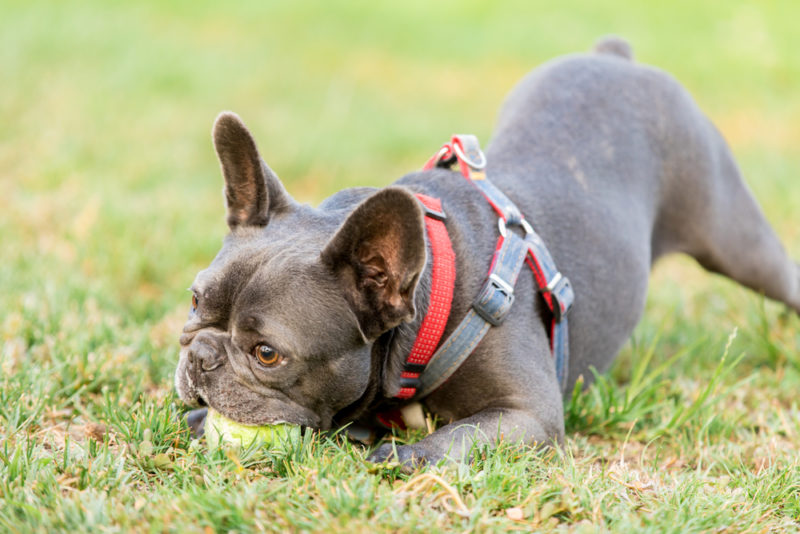 French bulldogs are playful, charming and adorable, but they’re also intelligent and adaptable. Some are attentive and calm observers while others are nonstop adventurers, but they’re all perceptive and highly attuned to their loved ones’ feelings. That said, it’s important to remember that training plays a crucial role in shaping the temperament of any new puppy. The French bulldog is a stubborn and smart dog breed, so you need to be confident and assured when showing it the ropes.

French bulldog puppies are a handful because they’re super-energetic and love pushing the boundaries. They love chewing through toys and getting into all kinds of mischief, but this urge usually eases as they mature.

Frenchies truly adore the company of people, so they’re best suited to homes where someone is present most of the day. If you’re looking for an affectionate little dog that loves sitting on your lap and loves to be loved, a French bulldog is the perfect dog for you.

A French bulldog has a big personality and a stunning appearance to match, but it requires a little grooming to stay looking its best. It has fine fur that sheds but is very easy to manage, so weekly brushing with a hound glove or grooming mitt helps remove fur gently and stimulate healthy regrowth.

These little guys are very clean, so you don’t need to give them weekly baths. Instead, give them a scrub only when they get visibly dirty, and be careful to use a vet-approved shampoo, as these dogs are prone to allergies. You’ll also need to make sure you don’t get its face wet when bathing it because the folds on its face are prone to irritation. Once your Frenchie is dry, gently lift the folds to check for wetness and carefully pat them with a baby wipe to clean them if necessary.

Frenchies have a stubborn streak that can be a barrier to training for the inexperienced, but their eagerness to please and intelligence means it’s possible for anyone to do a great job. They’re unlikely to do everything you ask of them, so patience and firm resolve are essential. If they sense that you’ll give up or they can get their own way, they’ll keep pushing.

Be sure to keep training to small, manageable time periods and choose positive reinforcement every time. Treats are an excellent incentive, but don’t overdo them as this dog breed is prone to obesity. Here are some quick tips for training French bulldog puppies:

French bulldogs are perfect for apartments because they’re small, they’re clean and they don’t require endless exercise. Ideally, you should take them for two to three walks per day, each lasting no more than 10 to 20 minutes. Walks keep them trim, and the sights, sounds and smells provide mental stimulation to fend off boredom. Let them take the lead with regard to pace and duration, and stop the walk as soon as they seem out of breath.

Get Your French Bulldog Puppy Today!

Our pups are waiting for their forever homes! Call Your Puppy FL at 813-444-4365 to adopt a beautiful puppy today. We offer French Bulldogs for sale in Tampa, Bradenton, Orlando, Pinellas Park, Sarasota, Wesley Chapel, St. Petersburg and all around Florida.

The staff are excellent

We found our new family member here. So excited to have him. The staff are excellent to provide all necessary paperwork. Very clean nice facility